Back in November, we covered online gift card fraud extensively - why it’s such a hot new target for fraudsters, and why it will only continue to rise. But a recent piece by Robin Sidel at the WSJ suggests that traditional brick-and-mortar gift card purchases with counterfeit cards isn’t going anywhere. Given the recent liability shift due to EMV, retailers are finding themselves more on the hook for fraudulent gift card purchases than ever, and are taking drastic measures to attempt to curb it.

Where is This Fraud Happening?

The short answer? Everywhere. Below is a very small sampling of the incidents we’ve run across in the past month with counterfeit cards being used to purchase gift cards. These are only a handful of dozens that are caught and being actively pursued, and an even smaller fraction of the hundreds that go on undetected.

2/29 Michigan to Pennsylvania - Several individuals used fraudulent cards at a national retailer to purchase thousands of dollars in gift cards.

2/15 Georgia - Counterfeit cards used to purchase gift cards at a grocery chain, and then used those cards to purchase money orders.

And just last month, a Brooklyn woman was sentenced to prison for her role in a crime ring that racked up $435,000 in fraudulently purchased gift cards. Over the course of nine months from February 2012 to January 2013, the woman targeted nearly 50 Price Chopper stores, using stolen credit card numbers to purchase various gift cards from the store - one transaction alone nabbed them $16,900 in Home Depot and Sears gift cards.

Why Are Retailers Hot on Gift Card Fraud Now?

Simply, the financial burden of selling gift cards to individuals using counterfeit cards has shifted, and is starting to fall in their laps. EMV Connection lays out the new rules concisely below:

The most important piece here being that merchants who do not have EMV compliant terminals, forcing chip cards to be run with their magnetic stripes, cannot catch counterfeited chip cards, and therefore will incur the chargeback from issuers for transactions on counterfeit cards that they approve.

In Sidel’s piece, she notes some merchants are requiring gift card purchases be made with cash. Others are limiting the amount of gift cards that can be purchased, and some - like Safeway, have stopped selling certain gift cards altogether.
‍

Kroger is in the midst of upgrading its checkout equipment to accept chip cards and expects to complete the overhaul by the end of the month. To ward off thieves, the grocer is limiting the number of gift-card purchases that are made on a credit card within a 24-hour period, said Chris Hjelm, the chain’s chief information officer.

“We have done some different things for nonchip transactions to make sure we are mitigating the risk,” he said. Mr. Hjelm declined to discuss further details, saying “the bad guys would love to know.”

What Else to Look Out For?

Gift cards are such a lucrative target for criminals, and the methods to acquire them continue to evolve and get more creative. Eventually, when the majority of payment cards and POS terminals being transacted with are EMV compliant, criminals will be forced to employ new methods. We recently caught wind of a new tactic that’s worth taking note of:

In this scenario, the criminals come in pairs. Criminal #1 brings a gift card to the cash wrap, while Criminal #2 takes note of the number and initiates a money transfer at the service desk. Clever criminals have found out that gift cards are often activated when they’re scanned, not when the purchase is completed, so Criminal #1 at the cash wrap stalls the completion of the transaction as soon as the card is scanned. Criminal #2 at the service desk immediately uses the now active card number to finish the money transfer, quickly draining the gift card of its value. As soon as it’s completed, criminal #1 cancels the transaction at cash wrap, and they both walk out with the funds, no purchase even required.

But, we think the biggest problem area moving forward will be the purchase and transfer/selling of gift cards online, which we cover extensively below: 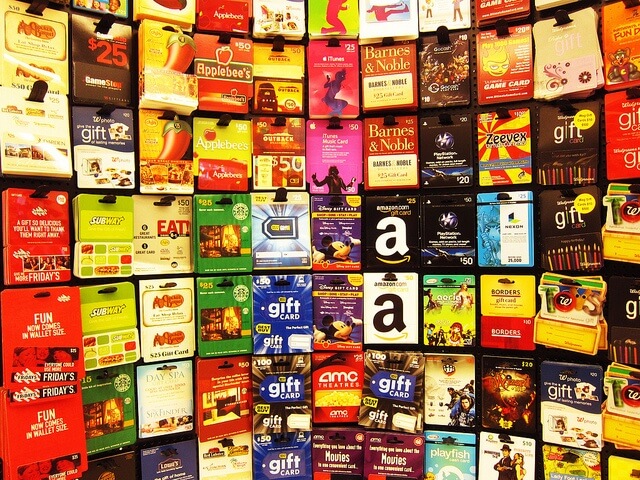